Step 1: go to brightlightforshadowinytimes.wordpress.com and pick out your favourite Tarot card.

Step 2: email halifaxprisonersolidarity(at)riseup.net with said favourite card, and how you would like to receive said card (in person around Halifax, or by mail)

Step 4: enjoy the wonders of fundraising without having to leave your living room and wait for said favourite card to arrive in the mail! You will receive a print (a little bit bigger than 8.5 / 11) and the writing associated with the card.

ALL PROCEEDS GOING DIRECTLY TO CEDAR!

To wet your tastebuds of said cards: 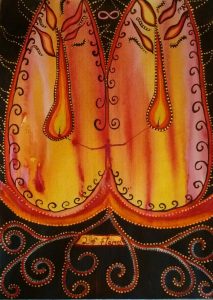 For more information about Cedar:

As It Stands Today: Cedar’s Arrest

This has been a big month for Hamilton. To contextualize Cedar’s arrest, we can start with the Anarchist Bookfair in early March, our first bookfair here in 7 years. The event was a smashing success, and brought together people from all over the continent to explore possibilities for radical change, to envision a world without enforced hierarchies and domination, to simply meet each other and learn from each other. The weekend was particularly marked by a small riot through one of Hamilton’s most affluent neighborhoods and down one of its most noxious commercial streets. The “Locke Street Riot” was a collective expression of rage, not only against the rapid gentrification of Hamilton, but against capitalism and the violent world of alienation it fosters. It led to a lot of productive conversations about the inevitability of discomfort in fighting for new worlds, and the importance of clarifying and articulating our politics. The riot also kicked up some toxic Hamilton sediment, including a mass spillage of sentimental tears for small businesses, shrieks of “terrorism” from city councillors, and anti-anarchist fervor from local alt-right trolls who saw this as an opportunity to step into the limelight.

In the weeks that followed many of these reactions were channeled into Hamilton’s only anarchist social space, The Tower, which became the defacto target before they even had a chance to come out in support of the riot. First its windows were smashed, then the door was kicked down and the library got trashed, then the locks got glued, and more recently we’ve seen an ongoing wave of amateur graffiti, including the word “gay” written in crumbling wheat paste on the new plexiglass windows. In late March, while supporters of the tower were busy cleaning up after the break-in, a coalition of white-nationalist, misogynistic, homophobic trolls organized a rally in support of the businesses on Locke Street. Their sad rally was confronted and largely foiled, but not before a few of them had a chance to mingle with Locke Street business owners and chit-chat over a lemon-pistachio donut. Information was leaked revealing that the Soldiers of Odin and The Proud Boys were hoping to head over to The Tower after the rally in order to confront the “120 lbs beta males” they hoped to find there. The first time they showed up they found 40 anarchists ready to defend the space. They screamed about their democratic rights and ended up utilizing a police escort to get to the other side of the street. A few hours later a smaller group of them showed up drunk looking for a fight, and despite noble efforts to deescalate we ended up sending them home that day with bloodied and broken noses.

Meanwhile, public pressure to find those responsible for the riotous action on Locke street built. The police had been unable to apprehend anyone on the night of the action, and had responded to public outcry with promises of justice and desperate pleas for public cooperation. Finally on April 6th, one month after the riot, the police put on a show for the bloodthirsty public. Warrants in hand, they smashed down the door of a collective house at dawn and lobbed a flash grenade into the living room. With assault rifles drawn they stormed through the house putting people in cuffs, and arrested Cedar (Peter) Hopperton charging them with conspiracy to commit an indictable offence (unlawful assembly while masked). The others were released and made to spend hours in the driveway while the cops turned the house inside out looking for anything that might help their investigation. They seized computers, phones, loose papers, zines and books, which will inevitably take years to recover from their greasy hands.

Cedar’s bail hearing, which itself only occurred five days after the arrest and after one particularly sneaky maneuver by the Crown to delay it, was a painstaking ordeal. Four hours of blathering drivel in which it became clear that not only Cedar, but all of anarchism was on trial. In the end Cedar was denied bail and sent back to the hellscape of Barton jail where hordes of abducted people wait in wretched conditions for trial. They will potentially remain in Barton for a year or more while the state drags its heels in making a case against them.

We in Hamilton have organized a solid support team to make sure that Cedar has reliable legal defense and as much advocacy and communication as possible. We want to continue the projects they hold dear, and support any forms of organizing they might pursue in jail. We’ve launched this blog as a space where we can provide updates on Cedar’s whereabouts, their legal situation, and how they’re doing. Should there be any more arrests in connection with the Locke Street riot this site will offer similar outlet for those support efforts. Prison isn’t the end of the road for anarchists, it’s merely one dimension of the world we stand against. We will do everything in our power to resist the isolation they attempt to impose on those they capture, and continue to fight together against the world of police, courts and prisons.

Posted in General | Comments Off on Free Cedar! A Tarot Fundraising Project

Come out to RadStorm (6050 Almon St, suite 212 – up a flight of stairs) on April 30th at 3:00pm to write letters to prisoners. A list of political prisoners will be provided, you can also check it out here – (https://denverabc.wordpress.com/prisoners-dabc-supports/) Feel free to bring plain envelopes and stamps if you’d like – but no pressure! We will have some!

FOR A WORLD WITH NO PRISONS

Come out to RadStorm (6050 Almon St, suite 212 – up a flight of stairs) on March 5th at 1:30 to write letters to prisoners. A list of political prisoners will be provided, you can also check it out here – (https://denverabc.wordpress.com/prisoners-dabc-supports/) Feel free to bring plain envelopes and stamps if you’d like – but no pressure! We will have some!

!FOR A WORLD WITH NO PRISONS!

Come out to RadStorm (6050 Almon St, suite 212 – up a flight of stairs) on January 29th at 3pm to write letters to prisoners. A list of political prisoners will be provided, you can also check it out here. Feel free to bring plain envelopes and stamps if you’d like – but no pressure! We will have some!

FOR A WORLD WITH NO PRISONS!

On Sunday, April 12th, we are holding a silent auction for Annie Clair at the Mi’kmaq Native Friendship Centre to raise money for Annie’s legal fees. The event will be from 6:00-8:00 pm, with tasty food, poetry from El Jones and Rebecca Thomas, Annie Clair will speak, and more special guests. There will be beautiful art and other great items from our community in the auction, so come prepared to bid!

We are asking everyone in the community to come and share your support for Annie! Suggested donation is $10-20 at the door, however no one will be turned away for lack of funds.

Please feel free to spread the word among your networks! 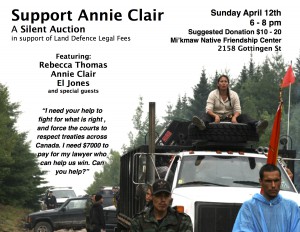 Posted in General | Comments Off on Come to Annie Clair’s Silent Auction!

Currently we are accepting donations to support Mi’kmaw Land Defenders who set up a blockade in Elsipogtog, NB, to stop fracking exploration on their territories. There is a trial coming up in June, and we need to raise $7000 for legal fees. To make a donation you can click on the paypal button on the right, and specify in the note that it is for Mi’kmaw Land Defenders.

Please watch the video for some more information.